Amend your nodes to fit your applications

It’s time for the third and last part of our node parameterization mini-series. In the second part, we created a device that connected to a serial port and grabbed data from the hardware. The device was configured based on a set of parameters that were read at runtime. Regardless of the type of hardware the device connected to, it would always read the data and publish them to a topic as they are. But what if we wanted to parse these data and publish them in the appropriate type of message? So instead of

Can we still have one single device and yet make it process and publish different types of data based on the associated hardware? Yes, we can. Plugins will come to the rescue. As always, there is an accompanying repository which you can download and try things yourself.

Have you ever used nodelets, the laser pipeline, or ros control? With nodelets, the nodelet manager can take different forms depending on the nodelets that are loaded at runtime; that’s made possible without any changes in the code. Similarly, with ros control, you can choose to use position or effort controllers for your robot and the controller manager will accommodate for that without the need to recompile anything.

Both managers accomplish this by making use of plugins. They load instances of classes from runtime libraries. pluginlib offers this functionality in ROS. You can read more about it in its main page and the tutorial Writing and Using a Simple Plugin. In essence, all you have to do to write a plugin is to

Then to use a plugin you just have to

Once you have the object in your hands, you can initialize it as usual by feeding it with the appropriate node handle (the plugin will still be initialized based on a configuration file; nothing changes here). Let’s now see an application of plugins on our running example of device drivers.

One additional dependency compared to last time is the ros_node_configuration package. We need to download it and have it in our workspace:

The ros_node_transformation package will read the SerialHandler class from ros_node_configuration as the handler stays unaffected by our changes and doesn’t need to be copied over.

The limitation of our last design was that a device had no way of adapting to the hardware with which it was associated. All instances of SerialDevice were publishing std_msgs/String messages. Instead, we would like for a device connected to an IMU to publish sensor_msgs/Imu messages, and for a device connected to a Sonar to publish sensor_msgs/Range messages. In order for the devices to do this, they would have to know how to parse the incoming data, populate a message and publish it to a topic. So, our goal now will be to encapsulate all this functionality in a class hierarchy which we will turn into plugins. Then, upon initialization, a device will load the appropriate device publisher based on the given configuration and thus be able to adapt to the specifications. 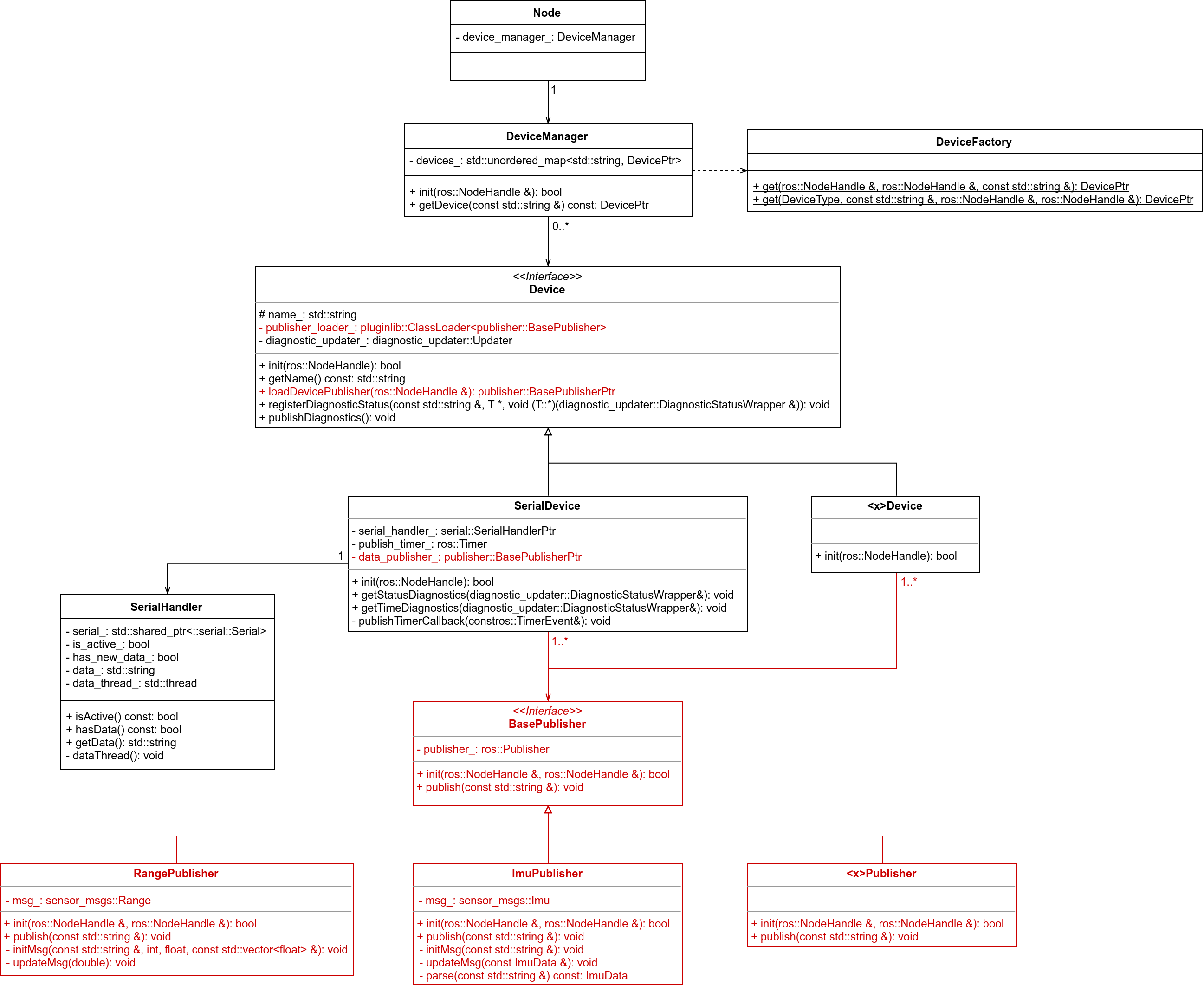 Let’s take a look at a few points of interest in the implementation. Firstly, we define the Publisher hierarchy as normal and then we register the publishers as plugins in their cpp files:

And that’s it; nothing else in the code says “I am a plugin”. Next we specify the list of device publishers in device_publisher_plugins.xml:

<x> in path="lib/lib<x>" is the name of the library we created in CMakeLists.txt and contains the publishers. The name attribute in the class tag is what we will later use to specify that we want an instance of the class in the type attribute. Lastly, we need to make the plugins known to ROS by exporting them in package.xml:

Then, in order to load a plugin, Device has a pluginlib::ClassLoader which is what delivers the publishers when requested:

Launching the nodes is exactly the same as before:

What needs to be updated is the configuration files:

A new publisher namespace is added in each device configuration. There, we put the publisher type, the name of the topic that publishes the data and anything else that is necessary for populating a message. A publisher reads these parameters and initializes itself.

If we execute the launch file, we will see 3 devices being created as before:

The same nodes and topics will be present in the ROS network:

But now the topics have different types:

We can echo the topics to view the data, or visually inspect them in rviz by setting the start_rviz flag to true during launch:

I hope you have enjoyed this series on the parameterization of ROS nodes. We started with fixed and cumbersome nodes which we made more flexible by extracting parameters from them. We then used configuration files to initialize these parameters and be able to define different instances of a node. In the end, we used plugins to further extend the potential of parameterization by allowing a class to transform and adapt to different scenarios.

Now that we know how to better structure our code when simulating a system, we are free to return to Gazebo. Next time, we will see how we can create a virtual world and build a map for it.