Define your nodes in configuration files

Let’s continue with the second part of our node parameterization mini-series. This time we look at how we can minimize development effort and maintenance by taking advantage of configuration files. Our working example will focus on setting up devices present in a robotics system. Instead of creating multiple nodes and hardcoding the initialization of specific devices in each one of them, we’ll see how we can create one generic node that can load any number and type of devices. This way we can spawn instances of the same node with different configurations and have them automatically connect, initialize and retrieve data from the specified devices. As always, there is an accompanying repository which you can download and try things yourself.

A ROS system is a distributed network of nodes. In other words, it’s a collection of system components, potentially situated in different computers, that communicate with each other in order to exchange information. Some of these nodes are part of the hardware interface and others of what creates the intelligence of the robot. The hardware interface is what connects a high-level node with the real hardware. It’s a fancy way of describing a set of drivers. A driver connects to a communication bus, talks to one or more devices and creates an interface, i.e. topics and services, such that data from the devices are pulled into the ROS network and commands from the ROS network reach the devices. So let’s see one way we can set up such devices.

We are going to create a few hypothetical devices so that we have something to work with during this process. We’ll use a utility to create 3 virtual serial ports with the names ttyIMU, ttySonarFront and ttySonarRear. One node will be responsible for the first one of them and another node for the last two. “Why not have one node for all three devices?”, you ask. For the sake of this example, let’s assume that one of the devices is on one computer and the other two are on a second one.

The nodes will read from the serial ports and publish their data on a topic. They will also monitor their state and publish diagnostic statuses. If you don’t know what ROS diagnostics are, you can read more about them here.

We’ll use socat (a tool that establishes byte streams) for creating the virtual serial ports. So first, let’s install it:

to create a directory in our home folder. This is where the serial ports will appear. Now we can set up the ports with socat:

We should be able to see 6 ports in the directory we created above:

How this works is that we write to one port [tty<X>0] and we read from the other one [tty<X>]. Lastly, let’s create a loop that will continuously write to the serial ports so that we have something to read later from our nodes:

We can check that data are actually written to the serial ports with the following command:

Before we continue, if later, for any reason, you stop getting messages published from the nodes, kill the streams with

and run the socat commands again to reinitialize the serial ports.

We’ve set up our (virtual) hardware and now it’s time to pull its data into ROS. How do we do this? We have to prepare a design and in order to do that, we need to specify requirements. We’ll assume different entities and assign roles to them, effectively encapsulating different pieces of logic. This is what it could look like: 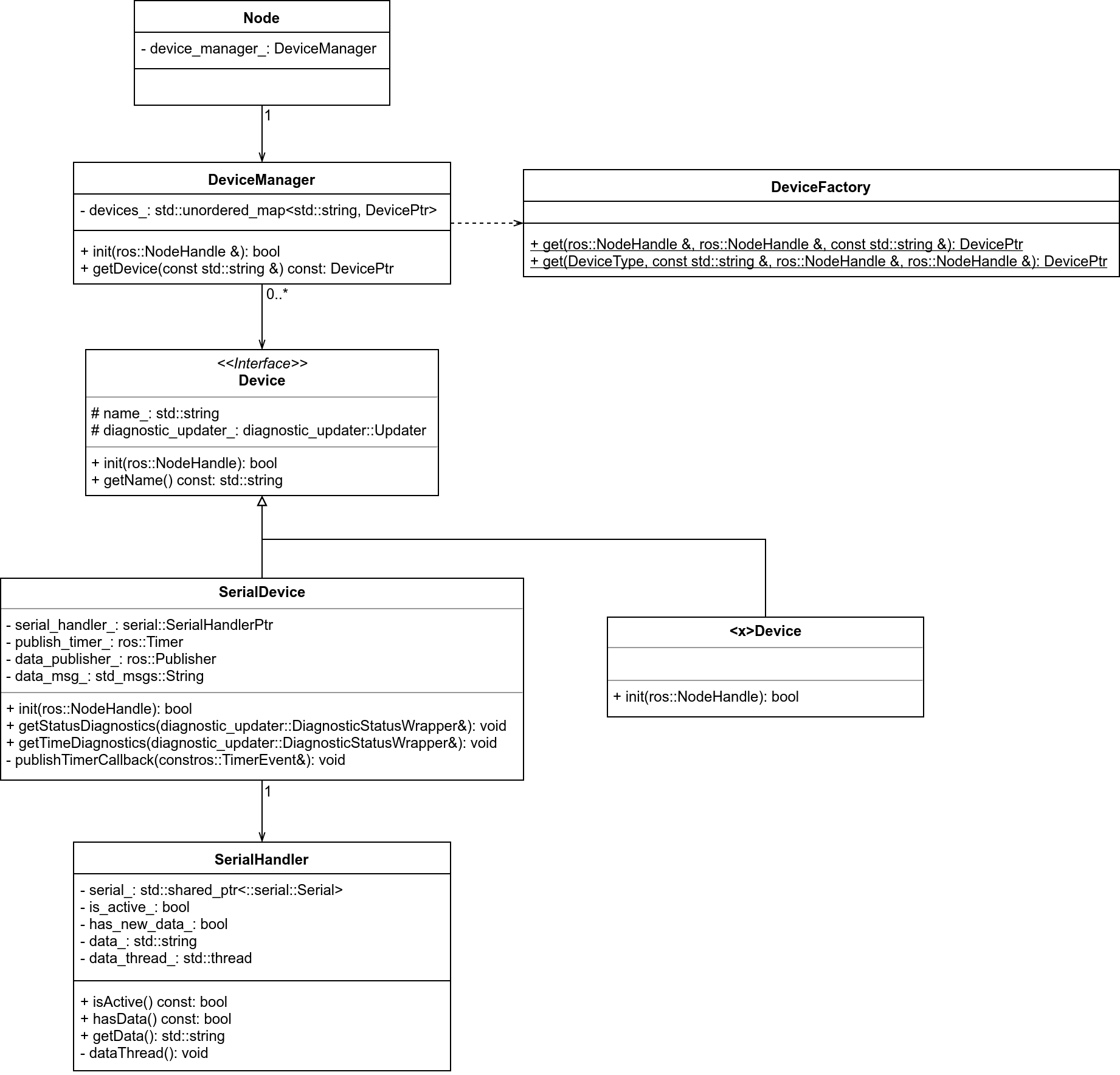 For the full implementation, please look at the repository. Here, we’ll only go through the most important points.

If we execute the launch file, we can see that 3 devices are being created:

There are 2 nodes responsible for them:

Each device is publishing its own data topic:

When echoing one of these topics, we get data like this:

Lastly, we can launch the runtime monitor and look at the diagnostic statuses:

There, we can see 6 statuses coming from the 3 devices. Each device publishes one status about the device health and another one about the topic health.

If we Ctrl+C the write loop we started earlier, errors will appear in the monitor suggesting that messages are not being published anymore. If we further run killall socat, new errors will appear telling us that the devices are down.

The concept of using configuration files for the flexible initialization of entities can be applied to anything we want. In this particular example, what we did is that we mocked devices. In a simulation, we can either formally simulate something and get actual data back, or if we don’t care about the data, but the system still needs to see that a device is present in order to function properly, we can just mock it and have it produce and work on artificial data.

So far, we’ve seen how we can create a device. Once created, the device has a fixed functionality. All instances of the device perform the exact same steps. But what if we wanted to alter these steps, transform or filter the data? Can we remain flexible and still make use of configuration files? We’ll look into these kinds of questions next time.