Posted by Nick Lamprianidis on January 27, 2020

Last time, we worked on creating a basic gazebo simulation. We arranged our gazebo resources, created a map for our world, and configured the launch of a robot model and the navigation stack, such that we are able to send a goal and have the robot autonomously navigate to it. This time, we build upon that simulation by spawning a second robot in the world with a target on its back, which our robot will try to follow. More specifically, we are going to work on an application of visual servoing, and in the meantime, we’ll have the chance to explore how to configure a multi-robot simulation, apply textures to models, enforce constraints between models, and have a robot follow a visual marker that is constantly moving in the world. 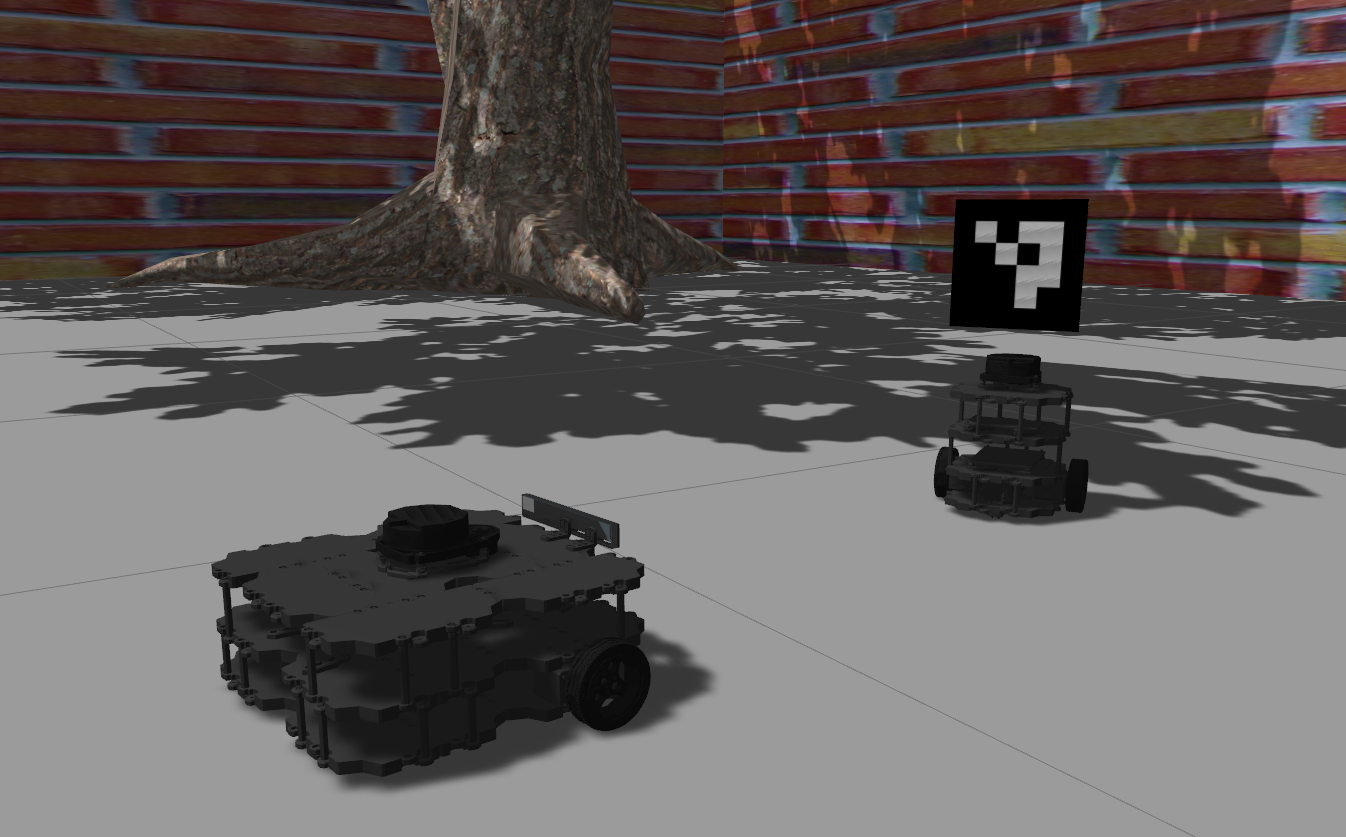 We will continue working on the same grobot repository we introduced in the last post. It has been updated to include the new material we will go through this time. Either git pull grobot and rosdep install to get the additional dependencies, or delete the grobot_ws workspace all together and repeat the steps from the beginning.

In gazebo, we can spawn as many models as we want, and even multiples of each one. We’ve seen this already in our example world, where we happened to have two instances of a couple of models. So, we should be able, in the same way, to spawn a second robot in the world, right? Not so quickly. Gazebo wouldn’t complain if we did that, but the resulting configuration would be broken. Let’s consider what would happen:

Fortunately, this is easily fixable. We can configure our resources with namespaces, and use a different namespace for each robot, such that there are no conflicts anymore. Inside the robot launch files, we need to:

There might be some nuances in the way we have to launch some of the nodes, but the above two steps, in the most basic form, is all we have to do. Having configured a robot bringup with namespaces, we can get a simulation with more than one robot like so:

You can examine such a multi-robot simulation example by running

This will launch gazebo and spawn two turtlebot3 burger models with the names karl and hank. If we do a rostopic list, we will notice that there are two instances of each topic, that was available before for one robot. For example, karl listens to the karl/cmd_vel topic for commands, and hank listens to the hank/cmd_vel topic. And if we do a rosrun tf view_frames, we’ll see that each robot has its own unique tf tree.

We are jumping now to a different topic. We are going to create a model for the visual marker that our robot will later follow. If we were to do such a thing in reality, we would probably look for a surface where we would stick the marker on. We’ll do something similar in gazebo.

Technically, we are going to apply a texture to an object. We have seen this before in our example world. This is how the tile pattern was put on the walls.

A texture, in its simplest form, is an image which is applied on each face of a geometry. The image is streched in order to cover an entire face. This is why, in the figure above, we see that the longer a wall gets, the longer and blurrier the tiles become.

Let’s now look into the marker itself. We’ll use an ArUco marker. For the purpose of this tutorial, we only need to know that this is a marker which can be observed with a 2D camera, and have its 3D pose within the world extracted from the image. 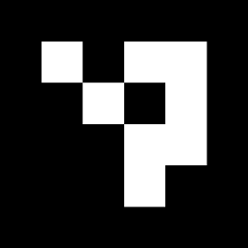 If we visit chev.me/arucogen, we can get an image by specifying a marker id and size. The shape of the image will dictate the shape of the geometry in the SDF model. The model is just a link with the usual visual and collision descriptions. The new addition here is the material section within the visual. A material is defined by a script and an image. The script is read by the rendering engine in order to configure and apply the texture.

This is what the visual description with the material looks like:

And this is the file structure of the model:

You can examine the complete model in the grobot_gazebo package. Having this model, we can finally spawn the marker in the world. 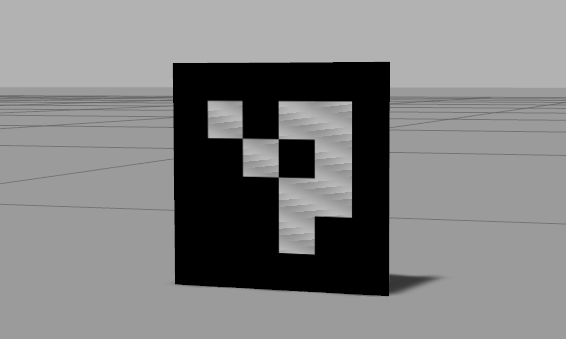 Now that we have a model for the marker, we need to attach it to a robot so that we get a moving target. It’s going to be pretty straightforward.

When we send an SDF description to gazebo and ask it to spawn a model, gazebo creates all the necessary links and joints in order to reconstruct the model. We have the possibility to do the same ourselves. That is, we can create a joint between two links, and those links can even belong to two different models. We can take advantage of this to create a fixed joint between the robot and the marker, thus constraining the marker and having it move with the robot.

We’ll keep it simple here and use an existing plugin to create the joint. We haven’t talked about plugins yet, and we might revisit them in the future, but basically, plugins are how we add functionality to gazebo. Plugins have a type that affects their initialization and lifetime, but ultimately, they all behave the same way. They wait for internal (gazebo) or external (ROS) events, and they respond, for example, by actuating a joint in the world or publishing a sensor message. If you are interested to know a bit more, you can have a look at the Plugins 101 tutorial.

This has already been done in our example world. If we start world.launch and list the available services, we are also going to see those offered by the plugin.

How the plugin works is, given two links in a certain configuration, a joint is created that locks the two together. In other words, the initial poses of the links matter. This means we need to control the relative pose between the two links (and by extension, models), before we call the attach service.

We are implementing this process in a node so that we can launch the node along with the rest of the robot bringup. The node will wait for the robot to show up, spawn and attach the marker, and then exit. To see this in action, you can run the patrols.launch once again, but this time with the has_marker parameter enabled. It will launch the same two turtlebot3 burger robots, but with two markers on top of them.

We are done with the gazebo topics for today. It’s now time for a fun application. We will make a waffle robot follow a burger robot with a marker. The waffle version of turtlebot3 has a depth camera which also publishes RGB images. If we start navigation.launch and give a goal to the robot, we can observe the live stream from the camera in the bottom left corner of rviz. We will use this camera to perceive the burger robot in the environment, and then try to follow it. Let’s consider what needs to go into this experiment. We have to:

We have already dealt with the first two points. What about detecting ArUco markers? For this, we will use the aruco_detect package. aruco_detect subscribes to a camera topic, and looks for markers in the images it receives. If a marker is detected, the node publishes its 3D transformation. All we have to do is provide the right parameter values for our own setup, and then the node will do the rest. Beware that the node is quite resource-intensive, and combined with gazebo, they will starve your computer.

In our case, aruco_detect has been configured to listen to /camera/rgb/image_raw for sensor_msgs/Image messages and publish fiducial_msgs/FiducialTransformArray to /fiducial_transforms. A fiducial transform message contains a marker id and a 3D transformation that tells the position and orientation of the marker with respect to the camera.

Last but not least, we need to figure out how we are going to control the robot. The goal of our control algorithm is to maintain a certain pose relative to a given target. The idea of vision-based control is about driving a robot with visual feedback. We will use the extracted information from the camera images to control the robot. So, for every fiducial transformations message, our control loop will act as follows:

To follow a target, we need to first see the target. If the target is not in the camera’s field of view, we cannot just stay idle, as it might never show up. So we need to start exploring the space. We will consider two simple approaches: 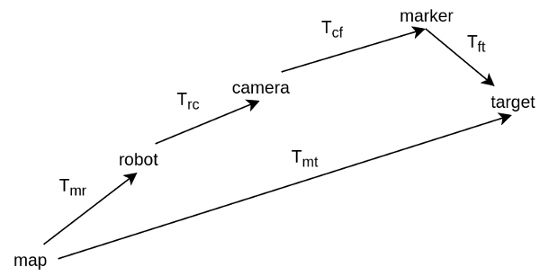 move_base has two interfaces for sending navigation goals. One is a topic, move_base_simple/goal, and the other is an action, move_base. We use the topic to continuously send goals as we receive marker transformations. But we use the action when doing exploration so that we have some feedback. In the case of the ‘rotate’ exploration, for example, we want to keep going as long as we don’t see the marker. For that, we need to know when the robot has reached the commanded orientation so that we send the next one.

What was discussed is implemented in the follow_marker node in grobot_navigation. To see it all in action, you can run the visual_servoing.launch with your preferred exploration strategy.

It doesn’t take long to notice that the approach is unreliable. The robot frequently loses track of the marker. The problem is that we are giving a goal to the robot and letting it freely navigate. In this example, we implemented our algorithm as an application on top of move_base. In a real scenario, we would have to integrate our additional requirements into the navigation planner. The goal would be to make sure that the robot keeps track of the marker and to optimize its trajectories by anticipating where the marker is going to be.

We’ve seen how we can create and configure multiple resources in a simulation. We’ve worked on an application where we controlled a robot with input from a camera and had it follow a marker. The result was inadequate, but it showcases that by combining gazebo and ROS, we get a platform where we have all the freedom we need to experiment. So, what are you going to try next?